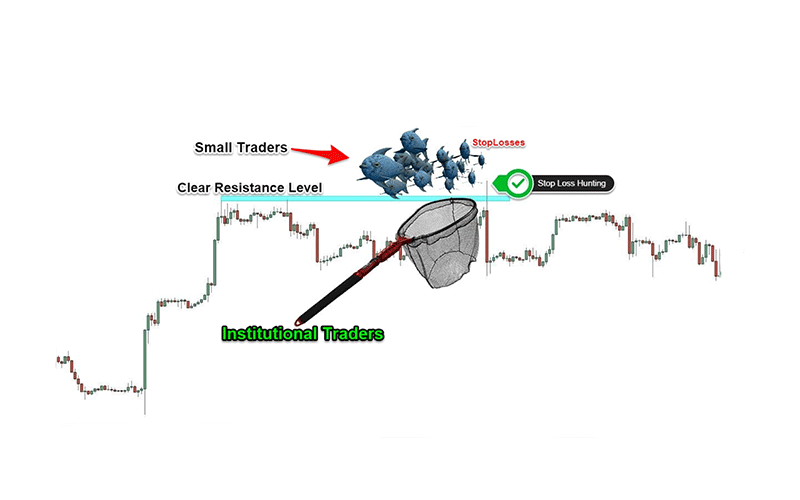 One of the challenges with forex is the different market phenomena that exist. As a retail trader, especially, there are some actions of prices that seem unexplainable. One of these actions, which is always contentious, is the notion of stop loss hunting. The two questions to ask are, what exactly is stop loss hunting, and does it really exist?

What is stop loss hunting?

Stop loss hunting refers to where the market drives prices above or below the stop loss orders of traders for reasons of ‘hunting for liquidity.’  Due to the highly leveraged environment of forex, stop loss orders are extremely important. However, as the markets are very erratic, a stop loss is not always an indication that a particular trade would have been eventually a loser. Stop loss hunting attempts to take advantage of this premise, where traders typically set either tight stops or stops at apparent levels.

Various arguments exist over which players perform this action and whether it’s manipulation or just a natural market occurrence. Ultimately, we continuously see cases of stop loss hunting on the charts.

Does your broker ‘hunt your stops’?

The idea that brokers perform stop loss hunting has never been definitively proven, further making stop loss hunting a mystery. We have to first think about the two main kinds of brokerage models in forex: the STP (straight-through processing) and the market maker model.

In the STP model, the broker sends your orders directly to the liquidity providers without any interference. The latter model involves clients trading a market created by the broker themselves. We could argue that trading with a so-called market maker may not mean actually trading the real market that everyone else sees. The market can look precisely like the interbank market, though it wouldn’t be exempt from manipulation. Therefore, conflict of interest can exist where the broker can technically manipulate the price.

One method they can achieve this with is through stop loss hunting. Unfortunately for the client, it would be tough to detect whether the broker performed this action or whether it was a market phenomenon. There have been many cases where traders can compare two different charts from different brokers and conclude tampering in one. Therefore, a broker could partake in stop loss hunting if they are a market maker and very rarely if they are STP.

Then who exactly ‘hunts stop losses’?

To understand stop loss hunting, we have to appreciate the function of a market. The market exists to facilitate transactions between buyers and sellers. The greater these transactions, the greater the liquidity. Retail traders cannot have enough influence on the liquidity, unlike their counterparts, mainly the larger players like banks, hedge funds, and other large financial institutions (also known as the ‘smart money’)

Liquidity matters significantly for the ‘smart money’ as it affects their entries. Because the large players prefer to build up positions instead of entering all at once, the hunting of stop losses becomes necessary. We must remember that a stop loss order is essentially an order to counteract a transaction. For example, having a stop loss for a buy trade means you are inversely selling to other participants when the market triggers this order. If everyone wanted to buy at a specific price, they need to find willing sellers, and the stop losses represent that.

Let us further illustrate with an example. Imagine a large financial institution that wanted to buy EUR/USD at the 1.10 support level, though its current price is 1.30. They could easily drive the price up from this point with enough buying power, albeit that this price isn’t ideal. Through exploiting the common stop loss myth of placing stops near support (or resistance), this institution can drive the price back just below the desired 1.10, where there’d be a flurry of stop loss orders. Since these buy stop losses are now selling orders to the institution, they can buy at their desired level.

Ways to avoid and capitalize on stop loss hunting

We should appreciate it’s impossible to avoid stop loss hunting completely, though we can at least minimize its impact over time. Let us first look at the methods of avoidance and the methods of capitalizing.

Numerous methods to capitalize on stop loss hunting. However, the most popular is through bull and bear traps. A bull or bear trap is yet another market phenomenon linked to stop loss hunting. The big players ‘trap’ the rest of the market where price initially seems to break a level but soon aggressively changes direction, often causing a sustained move. The key staples of these traps are (also referred to in the image):

A trader needs first to identify the support and resistance level. Rather than placing a pending order or entering immediately when the price enters the area, they’d wait for the price confirmation through the pin bar. By entering after the formation of the pattern, they could capitalize on the stop loss hunting.

Whether stop loss hunting is some form of manipulation or natural incidence, it’s a concept that every trader should heed. In the argument of manipulation, traders (especially newer ones) should stick with STP brokers to minimize the chances of such happening. Through understanding how this hunting exists to create liquidity, we can gain a better understanding of market dynamics, better manage risk, and even capitalize on these events.

Planning to Trade Currency Futures? Check Out Some Advantages