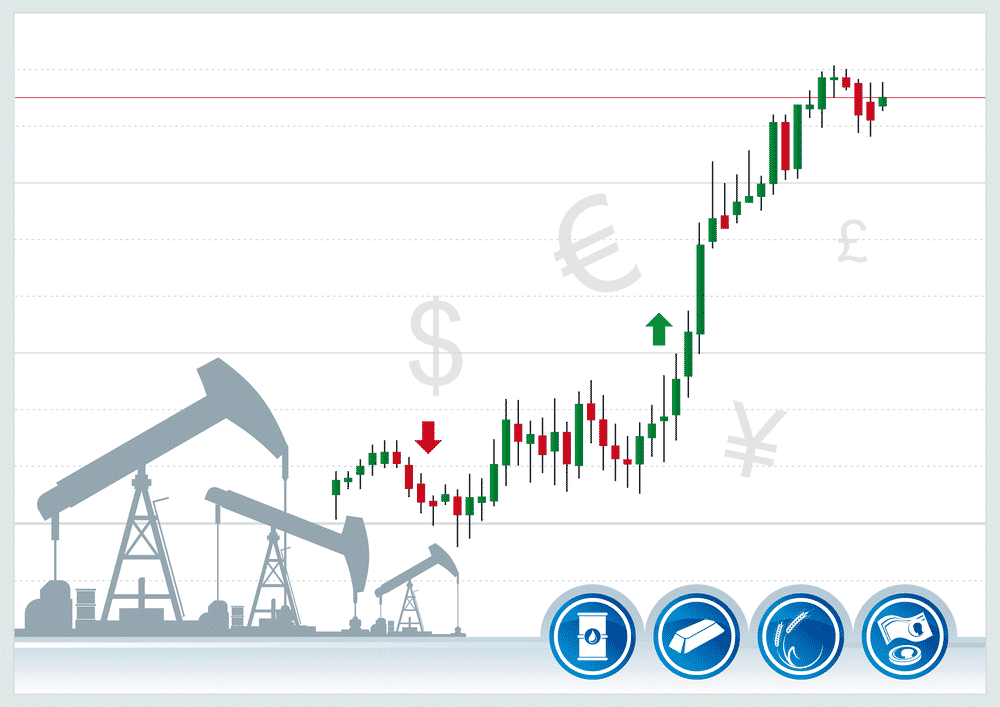 When trying to comprehend the relationships that exist between different commodities and currencies across the globe, it is important to remember that conditions change and that relationships are dynamic. A few long-term partnerships have survived and will remain in the future. AUD, CAD, and the Russian ruble are good examples of currencies tied to commodities.

Let’s look at several strong relationships between commodities and the currencies that follow them.

Australia, for example, is currently the world’s third-largest gold producer. This explains why the gold price and the AUDUSD pair are so closely linked. This stable relationship has been maintained over time. For instance, gold has a positive correlation with AUD. When the price of gold goes up, the AUD rises and vice versa. Statistics show that, with an 80% correlation, the AUD is heavily correlated with the price of gold.

This strong correlation creates the opportunity for traders to follow a pair trading strategy, which is based on simultaneously buying and selling direct connections. Part of the directional market risk is reduced when using a pair trading strategy. Pair trading extends the trading duration and reduces trade risk, but this does not necessarily mean ensuring higher profits. If the relationship breaks down, there may be trade opportunities.

The correlation between the price of gold and the Australian dollar goes down when the price of gold goes up while the Aussie dollar does not. This makes the trading strategy highly advantageous. By going short on gold (the strongest instrument) and long on Aussie, divergence can be made profitable. A profit is earned once the current average value of gold and the Aussie dollar return to their historical averages.

The Australian dollar follows price patterns similar to gold over the long term. Aussies are in favor of going long on aussie for this simple reason: gold offers no interest rates. They will have to pay a slightly higher overnight rate in order to hold the long position with a gold contract (negative swap value). Contrary to this, the Aussie is paying traders a positive overnight swap value. It could be an advantage if you plan to hold the position for an extended period of time.

When correlated with other commodities, the Australian dollar behaves in different ways. For example, it has had a 70% correlation with copper over the past two decades. The aussie is closely linked to silver and also carries a positive correlation to the New Zealand dollar of more than 90%.

Gold has a strong link with the Swiss franc (CHF). Because over 25% of Switzerland’s money is backed by gold reserves, it works in tandem with it. When gold grows, the CHF follows suit. Conversely, when gold falls, CHF declines too.

Another fundamental global commodity is oil. Both developed and developing countries depend on oil for their daily needs. Because Canada is a net oil exporter, a decrease in the price of oil has a significant impact on the country’s economy, while Japan is a major net oil importer that benefits from lower prices. As a result, changes in oil prices affect both the CAD and the JPY. When oil rises, it boosts the CAD and leads to a lower yen.

Conversely, lower oil prices lead to the reduced value of CAD and a rise in the value of the yen.

Gold, oil, and the major currencies can serve as a link for traders who use various trading strategies or who want to hedge their portfolios. Though moves on the currency and commodities markets are in sync with one another, there are occasional deviations in the timing of the correlation. Those deviations create profit possibilities for traders who are aware of them.

Trading experts agree that the primary correlation is gold and the AUDUSD, but some also believe silver is more reliable. Many Australians don’t realize how much of the country’s economy is dependent on mining, making up over 2% of the workforce and accounting for over 5% of the GDP.

35% of the country’s exports come from mining. As a result, the movements of the AUD’s commodity price index have a significant effect on the currency’s outlook.

The role of the USD

A vast majority of foreign traders use the dollar as a medium of exchange. When the value of the dollar rises, it becomes more expensive to buy commodities. Conversely, when the dollar depreciates, commodities become less pricey.

Some of the world’s major currencies and commodities have a time-tested correlation. Understanding the dynamics of these correlations is key to succeeding in trading forex. However, some other fundamentals affect the fluctuation of currencies.